The Three F: Sebastián Errázuriz, Industrial Designer. Tell me a little about you, your background, your childhood… What has influenced you more and how has it incised in your actual career?

Sebastián Errázuriz: My father did his Ph.D. about Education through the Arts. I am a London-raised Chilean, but anyone studying the Arts program in Chile from 5 to 18 years old is getting formed by my father’s designed program in Arts. Consequently, an extremely rigorous father, such a little captain who demanded me at the age of 5 not to just know every single artist but also being able to criticize, to look at and understand what the painter nor the artist had tried to tell. That was very useful for me, because I was aware since a very young age not only of the most important arts but about understanding how it works and trying to look at it. For example, I earned my allowance preparing my father’s university lessons. So if he was going to talk about Rembrandt or Picasso, I filled the slideshow with the information and the data sheets.

When I turned 18 all I have ever wanted was becoming Artist and I perfectly knew the curriculum I was about to study in university but, at the same time I knew all the theoretical contents I felt unworthy becoming an artist. Artists were like gods we venerated at home and I didn’t feel like one. Design offered me the possibility of working in projects that didn´t talk about me or about how special I am: it talked about problems that needed to be solved, about fabrication processes, technologies, structure…

When I finished my Industrial Design degree I needed to borrow some elements from arts to feel emotionally and intellectually satisfied and it was then when I started being classified as fully designer or fully artist. Nowadays I understand design as many different disciplines as a gradient: from white to black, with all the greyscale. This is the most difficult definition to understand because we’re not 100% a thing or 100% the other thing, we are more complex. In addition, this complexity gets along with the global interconnection that allows us to change our source to speak more accurately.

Thereby, I’m interested in incorporating functional elements from design to art — making design not only functional but also existential, sculptural, psychological, conceptual. If I get to do it and do it in a very gently and respectfully way I will be able to get through the people that try to classify myself and let them watch my art from a more complex and personal point of view. At that time my job consists in putting a mirror in front of us and asking you to look again. I try to make you see in the reflection who you are.

TTF: Since Audemars Piguet got involved with ArtBasel in 2013, every year a different artist has been selected to contribute to the fair with them. How are you feeling being The One this 2016 ?

SE: For me it is an honor, Audermars Piguet brand is a very bizarre, very rare, are like geeks of watches. Imagine, have you ever heard of a friend who says he wants to devote himself to be a watchmaker? It is extremely rare. It is like an ancient tribe that keeps their techniques and their traditional ways of working. It is in that where AP has a certain purity and beauty in what they do that is what sets them apart. And, in the technological development they do, their scale and tradicional manufacture, I think that we as creators can not not feel humbled by their expertise, their perfection, because it’s like watching a Darwinian evolution in which they have been generations who dedicated their complete lifes to make small contributions to a final perfection which still remains analogous, which represents what we are able to do. That’s very, very beautiful.

At the same time, it is a family businness. The fact that they don’t have every month to try to show how much they sold means they can invest in design, they can afford designs that do not have to sell instantly, but contribute to a company philosophy. That is very good as a designer, it is much appreciated because they are willing to invest in doing things right, to give us more room for creativity. So it’s really a treat to work with them. I am very grateful.

TTF: Which differences would you tell between Art and Design? Which is the limit?

SE: Have you got any brother or sister? It would probably be very easy to parents, when they have to refer to their children, sort of somehow facilitating thus nurture certain talents or interests; but at the same time, children often assimilate these roles because they allow you to have a personality. In part, the art and design within the culture have been these children, who are designated features and are asked to develop them and, in part, develop them well and appropriate them, but, for other part, they are given in an arbitrary manner. And if they had not been given so as marked, both brothers could have been much more influenced from each other, they could have played together for much longer and have learned from each other. I think therefore, it is very important today relearn from the other.

So actually, functionality is the great divide between art and design. However, today, I think it is also important that each fulfill our roles in their perfection. If you see this fair, much of the art in here is easy to recognize from artists we have seen and all make a bit the same. And, at that time, art becomes design, because they are no longer pushing the requirements of art, they are doing works that seem art, which match the language of the arts, but do not push the barrier and do not discover anything new. Similarly, the design is being generated over another chair, another table more … therefore seem design, but are aesthetic exercises that fail to move anything. Art has to re-break, the design has to contribute again and turn both have to learn from each other.

TTF: Your manner is about combining tradition and new techonologies and Audermars Piguet’s attention to details and usage. Was a big deal designing and producing this lounge for them ?

SE: I believe that in every way was a challenge, rather than technologies.We use technologies, but I learned a lot of lighting in this project, more than technologies that come with an instruction manual. The biggest challenge here is everything no one sees. Think, for example, the two clocks behind you: worth approximately $ 700,000 each; Imagine the security requirements there are implicit in these watches: bulletproof glass, recessed metal down, insurance approvals, camera system security, system to avoid the clock vibration and therefore not offering a blurred watch with many precious stones; I think there’s a lot of what’s behind unseen. These tables, which have a weight and a great flight, require that the floor is reinforced. There are many such details that I think were the biggest challenge and most stressful. The partition of the elements so they can be transported, the way acrylics are mounted in the illuminated glass. There are many details that have to be thinked… Even soundproofing foam stalactites: we had to learn about repercussions echo to listen to perfection clock machinery.

Even the ceiling. As you can see we are the only lounge with illuminated ceiling and for that, we needed to find the right way to run the system without expose fire protections: find a fabric that dispose with some water weight, approval fire crew of the show… this is all part of our work and our challenges as designers.

TTF: Ice formations and the beautiful snowed winter’s in Audemars Piguet’s home in the Vallée de Joux were your inspiration. Tell me a bit more about the “Ice Cycle” as a metaphor of time.

SE: When you go to Le Brassus Valley, where they are located you observe that it is a small valley, very tiny. Basically, the first thing you realize is how isolated they are and when you learn that in winter they are physically isolated. Historically they were isolated from 6 to 8 months; today, in the worst case a night or a weekend reimaining in Audemars waiting for the ice to melt. 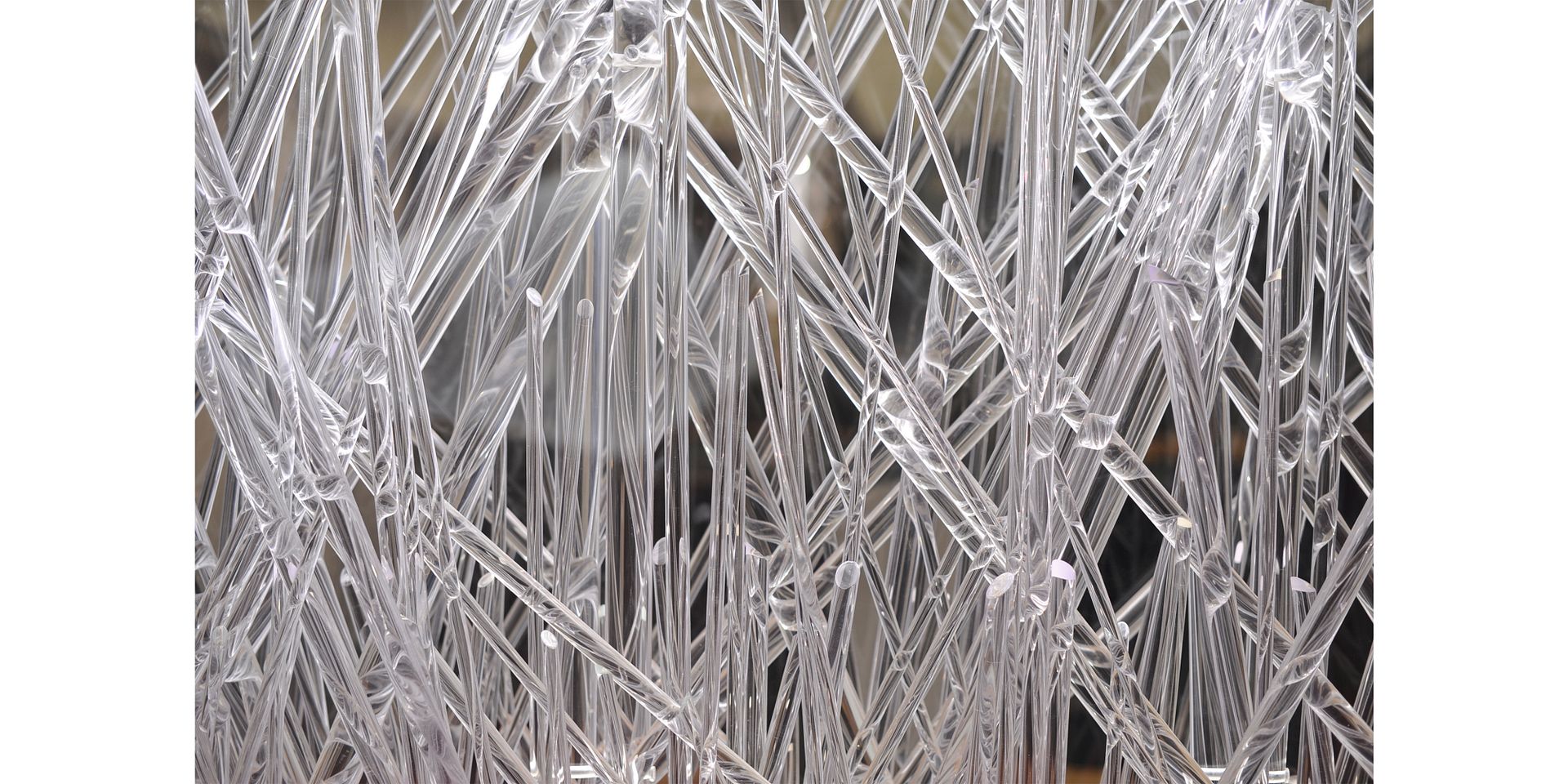 So this problem they were involved in turnt to be beneficial when you think they have nothing else to do that work because, in turn, the valley has the stones where they extract their minerals for jewelry, they have a gigantic forest where to get wood for smelting and so on, it becomes a profit. To make matters worse, as data annex, the ice business was the main driver of the train came to Le Brassus: the connection to the world comes from the ice.

Ice also you convey these ideas of the structures, which are frozen and thawed, and need much time to form delicately for generations and which, when melted, falling drop by drop creating a pulse that recalls the tic-tic clock. When the design is not drawing but of ideas, we can connect and open a dialogue, but when the design comes from the aesthetic basis we can not connect so easily and creates a discrepancy. So for me it is very imporant that have ideas that guide the design so that we are connected, so that the design can always connect to the visitor.

TTF:  I’m speechless. Could you tell us a bit about what are you into at this moment ?

SE: I’m working on about 40 projects in parallel, from the design of a private plane to a salt shaker or a sink. I can not tell much about the specifics of each, because I need everything to be on the news when we show. But I see it as a mixture like … Have you ever seen those photos of chess players who are in a masterclass and play with several chess players? For me, I aspire to that. I hope to be able to play several games at once and to remember the previous movement of each.

So, I try to develop that capacity. On the other hand, it is that small illustrated Larousse encyclopedia, which I wants the day I die to leave a mini encyclopedia yet reimagined of objects by me, almost like those writers able to create a complete world with characters, with spaces appear. I would love to not create a new world, but try to see the present in a different way and that would be my dream and my sense of life, my contribution to humanity.

TTF: Such a pleasure, thank you.
SE: Thanks to you.

Do not miss all the contents of Audemars Piguet for ArtBasel at @AudemarsPiguetExperience on Instagram !

A TALK WITH CHRIS GRAINGER-HERR, CEO OF IWC

A TALK WITH CARLO ANDREACCHIO – SARTORIA A. CARACENI